Are Your Facial Expressions Preventing You From Connecting? 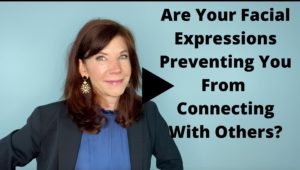 Have people ever told you that they initially thought you were aloof or unfriendly– and you’re perplexed, not understanding why they are making these premature and false assumptions? Or have you been on the receiving end, where you have encountered someone who rarely greets you with a welcoming expression, and it can feel like that the person is just not interested in connecting with you?

In my work with those who are introverted or shy, many express that they are not able to easily connect with others, and later are surprised to discover that much of that disconnect unknowingly stems from their facial expressions. There are a number of reasons that someone may have an unwelcome expression that they don’t intend, and here are a few:

1. The shy person who us uncomfortable with eye contact and smiling. It is common for some who struggle with shyness to feel uncomfortable around others unless they know them well. As a former shy individual, I discovered that when I was socially uncomfortable, I would clench my jaw and avoid eye contact; not because I didn’t want to connect with others, but because I felt awkward, and that was the physical manifestation of the way I felt internally. I felt awkward and self-conscious; others saw me as someone who did not care to connect with them.

2. The introverted person who is deep in thought. Introverts spend so much time thinking that they are often not aware of their facial expressions. When they are in their head, some express a “thinking face” (and there are other colorful terms for that) which can be misconstrued as stand-offish or rude. An introverted friend of mine named Mike manages the dining services at a university. To Mike’s surprise, a student he later got to know well admitted to earlier nicknaming him the “The Angry Bread Man”, because he commonly saw Mike putting out fresh bread with a scowl on his face. In Mike’s mind, he was just busy and didn’t have time to engage in a friendly manner…he had a job to do! In that student’s eyes however, Mike seemed angry all of the time. Once Mike learned of this, he has been more intentional about what signals his facial expression conveys. He pauses to look around, make eye contact and smile at students as they move through the cafeteria line.

3. The person who is from a part of the country or the world where pleasant facial expressions towards strangers is not the social norm and in some cultures, not even appropriate. For instance, many people who relocate to the southern part of the United States are puzzled at how often strangers smile at each other.

It is widely supported within the scientific community that there are six basic emotions, each with their own unique and distinctive facial expressions: Happiness, Sadness, Fear, Disgust, Anger and Surprise. Isn’t it interesting that four of these six emotions are negative? Whether you’re an introvert deep in thought or a shy individual who is feeling awkward, your facial expressions may be unknowingly displaying one of these four negative emotions.

Think of your facial expression as your non-verbal greeting with another person. It is a like a sign that you wear on your face that either reads, “Welcome” or “Keep Out.”

This does not mean you have to have a constant smile on your face. You can portray a sign of “welcome” by parting your lips, relaxing your jaw, and having a curious look in your eye. And when someone returns eye contact, greet them with a smile. It will make all the difference in your social and professional connections.