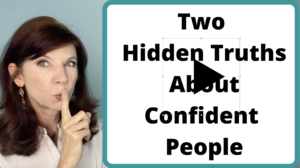 No doubt you are surrounded by confident people in life and in business. Those people who appear to have it all together, who are never rattled or exhibit signs of nervousness or insecurity. You see, we think we know confidence when we see it because we recognize those outward signs: their dress, their movement, their direct eye contact, their ability to think on their feet and speak up, etc. Many people do these things really well. They exude the traits of what we understand is a confident person.

Years ago, I was a member of Toastmasters International, an organization that helps develop members’ public speaking skills. There was a guy named Bill who visited our local club. He was well dressed, walked into the room with confidence, immediately started comfortably making small talk with people whom he had just met, and after the meeting began, he was called on to speak. Bill had this richness in his voice–he sounded like a News Anchor. Oh, and he told us that he had just relocated from Louisiana, where he was a News Anchor. He gave his first speech for our club and did a flawless job. Of course he did! Wasn’t this group of twenty people small potatoes for someone who had been a newscaster? Usually, I am that supportive, positive person who is one of the first to approach someone and compliment their efforts on their first speech. But I stopped short. I thought, “this guy doesn’t need any compliments from me. I’m not even in the same league of public speaking as this guy. This would be like a high school football player complimenting a player in the NFL for how well he plays. I would feel awkward, and he would probably dismiss my compliment as fawning over him.”

Fast forward to many years later when I reconnected with Bill. We chatted about our Toastmaster days. He said he remembered that first visit to our club so well. He confided to me that he was so nervous that evening when he entered the room and gave his first speech. Shocked at hearing this, I admitted my decision to withhold any compliments because of his confident manner. His jaw dropped. “I certainly didn’t feel confident on the inside.”

And this truth leads to the second truth:

The second hidden truth about confident people: They need and appreciate genuine compliments just as much as anyone else. I was reminded of this truth recently. I led a workshop for a group of supervisors who shared verbally and in writing, positive affirmations about their colleagues in the room. The most confident and upbeat supervisor was a young woman named Ashley. At the end of the workshop, the cleaning staff came in to throw out the leftover plates, food, and loose papers as I gathered up my belongings. Ashley returned to the room saying, “I forgot my list of positive words the other supervisors wrote about me.” I said, “Oh, no, the staff just cleared out everything, and probably threw it away in the trash.” What did Ashley do? She walked over to the trash can and started fishing through it, looking for that precious sheet of paper.

Although we’re taught to never make assumptions, it’s natural to make them. So the next time you assume someone is confident, also assume that they are not as confident as they appear on the outside. And never withhold a genuine compliment from someone just because you assume they don’t need to hear it. Your kind words may give them the boost they need on a day when they most need one.