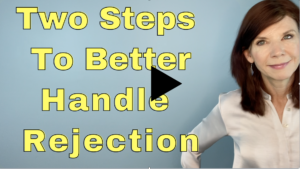 It seems like anytime we want to cheer up someone who has been rejected, our go-to advice is, “It’s nothing personal!” But if you are the one who is experiencing rejection, this advice doesn’t make you feel any better. Because of course rejection feels personal. That’s why it stings so much!

Here are two steps you can take the better handle rejection. The first step is something you can do mentally, the second step is a direct action you can take.

The first step to better handle rejection is to keep it in perspective:

Keeping rejection in perspective reminds me of my own senior prom night many years ago…long before it was cool for friends to go to prom together. My best friend Linda and I were shy and awkward, and so we were not surprised when we didn’t get asked to go. Instead, on prom night we went to a mall restaurant that served nachos like they should be–piled high with lots of cheese and jalapenos. Those nachos were like endorphins to our system, helping us feel better about ourselves and bolder about our circumstance. So we got the bright idea to drive to the venue to watch our fellow classmates enter the most epic event of high school. Why we thought this was a good idea, I’ll never know. Even though no one saw us, we felt even more rejected. But what I didn’t understand about my sad prom night experience is that no one had actually rejected us–they never asked us in the first place! We never got out of our comfort zone to ask anyone to the prom to even risk being rejected! And if we had, would ihey have been because they were really rejecting us, or because there was someone else they would rather go with–or something else they’d rather be doing? We would never know!

We’ve all experienced the pain of not being chosen, and it hurts even worse when you’ve put yourself out there. You tried out for the team but you didn’t make it. Your SAT score and class rank was high, but you didn’t get admitted to the college of your dreams. You applied for a promotion, but your co-worker was selected instead of you. You weren’t able to close a sale because you lost to your competition.

We tend to respond to rejection with the assumption that we’re not good enough, smart enough, cute enough, athletic enough, etc, and that assumption only makes us feel worse. Not only were we not chosen, but we feel bad about ourselves in the process, when most of the time it’s not really about us at all. It’s just that the person who is doing the choosing has chosen someone or something else because it’s about what they want or need at the time.

When you look back on past rejections, sometimes you discover on your own that they really weren’t rejecting you–you simply weren’t chosen.

And this leads to the second step to better handle rejection…to ask for feedback. How do you know if there is something in your control that you can do differently so that you are chosen next time?

A friend of mine named Julie Novak has worked with young actors for decades. Julie knows that casting is an important but sometimes emotional process for her students. They are auditioning for roles, but sometimes not getting the part. Is it something out of their control such as they just were not right for the character? Meaning maybe their age, their physical characteristics, their voice? Or were they not cast because of something that they can take control of for future auditions, such as their acting skills, or their responsibility for memorizing their lines and showing up for rehearsals on time? She’s not rejecting, she is selecting actors based on what she needs to do great casting for her productions. And the great thing is that Julie sends her students a note to explain the reason why they were not selected. But in most of life’s situations, people don’t volunteer the reasons why they didn’t choose us. So it’s up to you to ask for feedback.

There’s a positive way and a negative way to ask for feedback. If you ask, “Why didn’t you choose me?” That kind of question can come across as antagonistic and too direct, even if you don’t mean it that way. The person who didn’t choose you may respond with a vague reason just to deflate or shut down the conversation. But if you go to the person with a question such as, “I respect your decision, and am on a quest to get better. Can you give me some feedback as to what I could have done differently or what I need to work on?” This is a disarming question that puts the responsibility back on you. This question shows self-confidence. Will the person tell you the truth? Maybe or maybe not. But if you keep asking for feedback, some people will tell you the real reason behind their choice. And if it’s something that is in your power and you want to change, you are better equipped for future success.

So put yourself out there, knowing that most of the time rejection is usually not about your incapabilities or deficits, but if it is, you’ll know what you can work on if you simply ask for feedback the right way.

As my friend, Amy Modglin says, “If you’re not handling rejection, it simply means you’re not leaving your comfort zone.”