Avoid Asking This Opener Question When First Meeting Someone 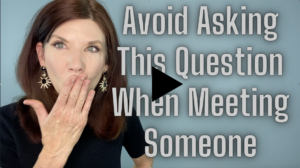 There is a popular opener question that many people ask to start a conversation when meeting someone the first time. We have all been asked this question at business networking events, professional conferences, and even social encounters. Sometimes it lands successfully and robust dialogue ensues as a result. However, many times it can backfire or fall flat.

The question is: “what do you do?” Meaning–“what do you do for a living?” I will admit that I used to be guilty of asking this as an opener question, but from what I have learned and observed in interactions, I refrain from it until I have taken some time to get to know the person. Here are four reasons why I believe you should avoid it as an opener question when first meeting someone:

1. People may wonder if you have a selfish hidden agenda. From your point of view, you may simply be asking the question to start a conversation. But that does not matter if it is received with skepticism. At some point you have probably been the recipient of this question when it is a way to inquire about your financial or social status, or a way to determine if you are good “lead” or “fit” for the other person. I remember years ago when my husband and I volunteered at a fundraising gala that was swarming with A-List influencers. A friendly couple who were also volunteering started up a conversation with us, and quickly asked questions about our profession. Once they learned that we were there to volunteer, they abruptly ended the conversation and made their way over to another group of people.

2. Some people feel discouraged or embarrassed by their profession or lack of profession. One of my clients has a very confident and professional appearance, and does not work a job or own a business. She told me that she hates the “what do you do” question, as it makes her feel embarrassed, and she does not know how to answer. She even avoids networking and social gatherings where she fears being asked this question because of the way it makes her feel. Consider the unemployed people who lost their job or their business as a result of the pandemic or for other reasons. Consider those who are working, but may feel embarrassed about what they do. Consider those who are retired and are trying to understand how to define this new season of life. This question can leave them stammering for an answer.

3. Some people have difficulty describing what they do. Have you ever asked someone the “what do you do” question and have no idea what the person does even after they answer? Some jobs or professions are hard to describe, and others use industry-specific terminology, titles or acronyms. I once observed this happen when I introduced two women. One woman asked the other “what do you do?” and she responded with a string of acronyms and industry lingo. I looked over at the other woman, who was so confused that she didn’t know how to respond. Rather than this question being a springboard for conversation, it just fell flat.

4. People want to be valued as human beings, and not human doings. In today’s culture, so much of our identity is known for what we do rather than who we are. When you ask someone questions that reveal you want to get to know about them as a person rather than what they do, you are like a breath of fresh air. I facilitate an exercise in one of my workshops for introverts in which I challenge them to make small talk with another person in the class for five minutes. The only rule is, “don’t talk about what you do, and don’t ask the other person what they do.” As a result, they end up discovering so much more about the person they are talking to, and sometimes are surprised at how quickly they uncover common interests.

When we think about our lives, there is so much more to us than what we do for a living. So before your next social encounter or even business networking event think of some opener questions to learn more about the human beings rather than the human doings you will encounter.

Do you have some go-to opener questions that work well for you in starting conversations? If so, I’d love for you to share them in the comments!