Use This Word For Better Conversations 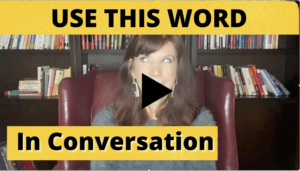 By switching out this three letter word I have noticed three results in my communication:

1. My message tends to be better received by the other person.

2. I feel more positive internally when I use this word.

3. This word can most always replace another common three letter word.

What’s the word? AND. What does it replace? BUT. Both words are conjunctions, meaning they connect sentences or clauses. Think about it like this. If you are speaking with someone, sharing a thought, and idea, or expressing your feelings and the person you are talking to responds with BUT, it negates what you have said. Think about a team  brainstorming ideas. One person voices an idea, and another person adds to that idea. However, when the other person replies with “yes, but…..” when “AND” could have been so easily used, it sounds like the initial idea is being challenged.  When you are on the receiving end of a , “Yes, BUT…or Yes, However….” and when you’re on the receiving end of a “yes, but”, it can feel deflating. For some of you, if you have made a statement you feel strongly about, just hearing the other person respond with BUT or YES, BUT can even put you on the defensive because it sounds like a disagreement.

I realized I used BUT quite a bit in my communication. Not because I wanted to be negative or challenge the other person, rather because I wanted to state a contrasting viewpoint, or mention something in addition that they had not thought of. And I had an epiphany. I started using the word AND, and my input sounded so much more positive! I was suddenly building on their idea rather than tearing it down, and as a result, my input was much more readily accepted.