Five Things You Should Never Say Or Do At A Party 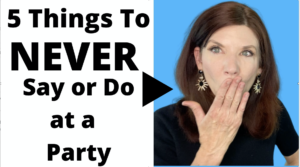 Have you ever been at a party and you hear or see someone say or do something that feels a little awkward? It is easy to spot cringe-worthy things in others; yet how many times have we said something that we shouldn’t have? I know I have been guilty of a number of these! You will not offend everyone if you are guilty of some of the following,  but you are better off not doing them:

1. Never hand your cell phone to someone else to show them a photo/video (unless they reach for it).
I don’t even want to hold my own cell phone while I am eating, much less anyone else’s! Scientists at the University of Arizona found that the average cell phone is ten times dirtier than a toilet seat! If you want someone to view photos or videos, simply hold your phone yourself and show them. Only hand over your phone to them if they reach for it.

2. Never go into detail when someone asks, “What do you do?”
​Many times people as this as a conversation starter. Sometimes they don’t even care about what you do, or even when they do, few people want a long explanation. Keep your answer simple and brief! Then you can turn the question around and ask them in return.

3. Never announce you are going to the restroom or bathroom.
Embarrassingly, I used to do this! I felt this need to let the person I was talking with know why I was leaving the conversation. However, a simple explanation such as, “Excuse me for a few minutes” or “I’ll be right back” is all you need to say. There is no need to announce where you are going!

4. Never linger after others have left.  ​
Although they usually won’t admit it, most hosts are tired and ready to clean up and go to bed or go home after a party. The last thing many people want is to have to continue entertaining and having conversations with someone who lingers. Many introverts are also “socially spent” and exhausted from all of the prior social interaction. Only stay if you are specifically asked to do so. ​

5. Never leave without thanking the host. ​
Sometimes it can feel inconvenient if you want to leave and the host is in conversation or cannot easily be found, but do briefly let them know that you enjoyed the party and are leaving. If you cannot locate them or interrupting them in conversation seems awkward, send them a text, email or thank you note  the next day.