Four Well Meaning Phrases You Should Avoid Saying To Others 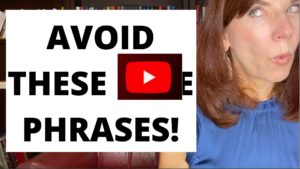 In our desire to connect with others, we can sometimes say words or phrases with an intent of meaning well and showing that we care for the other person, when actually they are met with disdain from the other person. Now, I must admit that I have been guilty of using some of these phrases to others. And ironically, it has only been when I have thought about how it feels to hear these phrases from others that I realized how they make me feel worse instead of better.

1. “Good luck.” This is such a polite phrase, as it is wishing success for someone, but unless a person has requested, “wish me luck”, don’t say it. When you say this phrase, you are insinuating that they have no control of their outcome. I remember first being irritated by this phrase when I was on sales appointments in a business I started over twenty years ago. I was working harder than I have ever worked in my life to make my business successful, and when a potential client sat across from me in a sales meeting and wished me “good luck” at the end, I actually felt offended. I felt as if they did not see the value in my product, and that the only way my business would be successful was by being lucky. Ironically, these people never bought from me!

3. “Calm down.” When a conversation or a situation is escalating, telling someone to “calm down” is not going to result in them calming down; it is only going to annoy them. It comes across as authoritative or like a directive. It is important to remember that if someone is upset over something or someone, the last thing they need is to feel like you are not validating their feelings. Everyone wants to be listened to and feel heard. Instead of telling them to calm down, ask them questions so that they will feel comfortable voicing why they are upset or emotional.

4. “I’ve heard that joke before.” I used to think I was doing others a favor by letting them know if I had heard the joke they were telling before. I thought I was being kind by letting them know they did not have to complete the joke, or giving reason why I may not laugh after they had told it. Then I realized how deflating it felt when others said this to me when I was telling a joke or story. It feels as if air is being let out of a balloon. Is it really necessary to let the person know you have heard it before? Unless you are constrained by time, what is the harm in simply letting the other person have the spotlight and listen to their story or joke just like you would want if you were the one telling it.