Not Feeling As Self-Confident As You Used To Be? Here’s The Silver Lining… 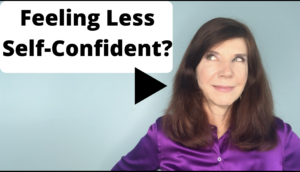 Are you bothered because rather than gaining more self-confidence as you get older you are feeling less self-confident?

Several of my coaching clients have expressed this frustration. They don’t feel as self-confident as they did when they were younger. As a result, some have begun to question their abilities or decisions. Others feel more insecure or awkward in social settings. Although it’s absolutely normal to feel less confident in certain situations, are you frustrated by these feelings because you recall your younger self as bold, unafraid, and ready to take on the world. So what changed?

If you were competent scholastically in high school and/or college, you likely had a healthy dose of self-confidence when it came to acing exams. Did you excel in sports? If so, you likely were self-confident in your athletic abilities. If you were popular at your last job where you worked for many years, you likely felt confident in social settings. However, as we get older, we leave that comfortable pond of familiarity for the unfamiliar deep ocean of the real world. The real world where no one cares about your GPA, how many sports trophies you earned, or how popular you were with your senior class.

With each new job or career, new move, with each new endeavor you are forging into new territory where you cannot rely on your past successes.

Don’t confuse self-confidence with self-esteem. Self-esteem is how you value yourself inwardly. Self-confidence is feeling certain in your outward abilities.​ Therefore, how are you able to feel self-confident when you’re doing something for the first time?

One of my clients excelled as an athlete and scholastically in college. He was a confident superstar. That is…until after he graduated. He then formed a  successful start-up company that required pitching to venture capitalists, communicating with established business professionals, and accepting interviews with major national news outlets. He fretted that he was not as self-confident as he was in prior years. But how could he be self-confident? Once he learned that being in new territory meant giving up the need to feel self-confident, he was better able to embrace it. He knew that it was separate from his self-esteem—the value he saw in himself as a person. He didn’t dwell on his lack of self-confidence or let it stop him from moving forward in those uncharted waters.

According to authors of the book “Surprise”, Tania Luna and LeeAnn Renninger, “We feel most comfortable when things are certain, but we feel most alive when they’re not.” When you push yourself out of your comfort zone, you are going to give up feeling self-confident. Use your self-esteem to embrace the uncertainty and never doubt that your self-confidence will come later. All you need to do now is keep forging ahead into new territory that makes you come alive.